Strangely enough, I can’t recall having been openly, verbally accused of “always having to be right”, I’ve experienced other peoples’ nonverbal recoil in response to something I’ve said, particularly if I had been correcting them.  So, even though those people might not come out and say it, they probably think I “always need to be right”, too.

It must be a common enough phenomenon, because even my search suggestions gravitated right toward that phrase. 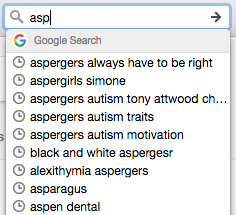 Although I’d been chewing on the idea for a post about this subject for a while, a neat discussion in the (awesome!!) comments section under a recent post got me thinking (thank you!) shifted my focus more acutely toward the subject.

It’s not so much what people said as how they acted.  The unexpected recoil.  The half-sarcastic “oh.  OK.  You’re right, then” or “I stand corrected”.  The subsequent cold shoulder.

It doesn’t matter that nobody has come out and asked, “why do you always have to be right?”; I know that something is amiss with their body language.  I might not read that body language completely right, but I know something’s up.  The air changes density.  The world gets a little bit crisper.  The vibes get a little shorter – more closed and less generous.

Of course, this feedback comes too late.  It’s even more confusing when I’m not sure how to read what I’m seeing.  There are plenty of gaps, and my brain will try to fill them in, often compounding an already south-headed situation.  And it’s even worse when I don’t even know what I did wrong.

I actually hadn’t been aware that they might be asking me “why do you always have to be right?” in their heads.

Because that’s not where I was going, at all.  I don’t always have to be right.  That’s not even close to the truth.  It isn’t the case.

But people will believe what they want to, and there’s no opportunity to set the record straight unless they air their thoughts.  It’s interesting to note that many people keep those thoughts to themselves in the name of courtesy, harboring them inwardly to be “polite”, when the real courtesy would have been to give me the opportunity to explain myself, soothe ruffled feathers, and clear the air.

The connection between peoples’ seemingly random reactions to my side of the conversation and the assumption that I have a superiority complex wasn’t fully revealed until I stumbled, quite accidentally, on some social skills information on an Asperger’s-dedicated website (this attribute, according to my searches, is almost exclusively connected with the Asperger’s classification as opposed to autism in general).

A right-fighter is a term I’ve heard only fairly recently, and there are a few versions of the definition, the best one of which I’ve seen is:

If I try pretty hard, I can bend my mind just enough to imagine why someone might say that about Asperger’s/autistic people.  The “overly emotional” part may be a little misplaced or misappropriated, but I can understand how non-autistic people might think we “insist on having the last word”.

The truth is different from what the general neurotypical population often perceives (and thus, assumes, unchecked).  And today, I’m here to set the record straight.

The perception/assumption that we do is simply a matter of different communication styles and thinking processes getting mismatched, crisscrossed, and tangled.  We might come across as fitting these descriptions/labels, but the truth is a whole different scenario.

I’ll try to debug the situation by explaining where we’re actually coming from, and where our heads are really at, in instances where we seem to “know it all” and insist upon being right.

We’re detail-oriented.  If a detail someone mentions/quotes/states is inaccurate, our minds may get stuck on it and we might not be able to leave it alone.  To let it go as-is feels like letting it hang in the air–loose, swinging wildly in the wind, and wrong/inaccurate.  Our perfectionism often has much more to do with ourselves; we’re usually a lot tougher on ourselves than we are with anyone else.  We wouldn’t feel right with ourselves if we let it go.  Our conscience might nag at us until we’ve made the correction.

We’re probably trying to help; if we care about you, we don’t want to fail to speak up if you’re incorrect; we’d rather teach you or share with you the correct answer.  If I correct someone, it’s because I’m trying to be of some help.  I love learning, and I don’t mind teaching.

In the neurotypical world, which is fraught with varyingly-subtle posturing, contests, and one-upmanship, the motive behind correcting and teaching is to score a point, a one-up, in the pervasive unconscious contest.  For me/us, however, the underlying motive here is usually not to impress; rather, it’s to share.  If I know something and I care about someone, then I want to share what I know with that person.  If someone has the wrong impression about something, then I want to help them grow by making sure that they have all the information possible.

I’m/we’re also usually open to new information–possibly more so than non-autistic people (in general; many exceptions can be found in both neurotypes).

In my/our day-to-day operations, logic, emotion, and gut instinct will all come into play, but if push comes to shove, logic usually trumps emotion.

This differs from what we observe in the general neurotypical world; it appears that emotion and intuition win out over logic in their battle of wills.  Behind many decisions, there is emotion involved.  As the decision or judgment call is made, emotion is attached to it, and an emotional investment is made in it.  Thus, it might be fairly difficult for the “average” person to change their mind, even after being presented with new information.  Even if that new information makes logical sense.  The sensibility of the information merely makes the “average” person more emotionally uncomfortable, as if to change one’s mind automatically criticizes them for being wrong.

(If you need convincing, simply consider the stock market.  It’s all math and numbers until someone panics, usually over the possibility of new less-business-friendly legislation or some other political shakeup or another type of instability.  The stock market will plummet as stockholders and investors slam their brakes on buying and start trying to sell off their shares like hot potatoes.  The herd has been spooked.  And, once down, it takes quite a while for the herd to calm down and resume normal regularly-scheduled programming.)

For people on the Asperger’s/autism spectrum, however, we’re not quite as easily spooked.  Perceiving the world in an alternative way often confers the benefit of being able to stare straight into a situation and look at it for what it really is.  We can take information as-is, without applying emotion.  We usually make a decision or judgment call based on the information, without connecting an emotion to the decision.  If we’re wrong, we’re wrong, and the internal standards to which we hold ourselves demand that we revise our opinions based on that newly-acquired information.  No harm, no foul.

The only Way that anybody truly knows is the Way of themselves, so when our default position is to operate with emotion detached from decision-making and judgment-calling, we might transfer that attribute to other people.  When non-autistic people encounter our unemotional, analytical Way of thinking, then they’re likely to be confused, and they believe we’re being condescending.  That’s understandable; after all, when other neurotypical people have acted in this way toward them, it was/is in order to get a one-up, to condescend, to score a proverbial point in the silly contest.  Since they are mind-blind, too, they don’t understand that our intentions are different, and that we’re not trying to be condescending or score points.

The truth is, if we’re correcting someone, we probably do know a lot about the subject we’re correcting them on.  It might even be a primary area of intense focus (i.e., a “special interest”) or a particular niche area of study/knowledge.  We also have kind and genuine hearts and intentions, even if we may come across differently due to nonverbal aspects, such as tone of voice, body language, word choices, and so on.  (Sometimes, when we’re trying to think and talk on the spot, “word choices” can sometimes be a misnomer in itself.)

Another potential underlying theme of “always having to be right” is that we may trying to get a piece of information right in our own minds, which may often involve saying it out loud, or maybe confirming with another person that we have it correct.  Rather than correcting someone else’s information, we might be trying to solidify that information for ourselves, and we’re actually seeking corroboration.

By our nature, we’re hardly ever condescending, right-fighting people with superiority complexes that always have to “win” a discussion.  Making such an assumption about our underlying intentions without actually seeking the truth from us directly is actually an instance of projection of a non-autistic person’s values, motives, and intentions onto us.

That’s not fair, and that’s not accurate.

So please, I encourage everyone who might feel like we “always have to be right” to stretch their minds and probe a little deeper, into us (and where we’re actually coming from), as well as themselves.

The world can be rest assured that Asperger’s/autistic people, in general, are probably one of the last groups that will challenge you to an intellectual/knowledge-based contest or try to score “points” on you in a discussion. 🙂

Feet on the ground, eyes toward the sky. View all posts by Laina Eartharcher

Please feel free to add your thoughts! I do my best to respond to each comment (even if it takes me a bit sometimes) :) Cancel reply

Seek and Ye Shall Find

Voted The Art of Autism 2017 Top Female Blogger – Thank You!

The Most Recent Blogs I’ve Followed

A collection of personal and patient-contributed recipes! Be sure to follow this blog at the bottom of the page!

Concise Politics -- Your Time should NOT be wasted.

Because you don't have time for the EXTRANEOUS BS! Please Comment at Bottom

Questions You Should be Asking the World Around You

Reading Between the Lies

Liberty & Justice For All

Change yourself, change your life!

The Autistic Writer
the news network

Ezekiel 3-21 KJV: Nevertheless if thou warn the righteous man, that the righteous sin not, and he doth not sin, he shall surely live, because he is warned; also thou hast delivered thy soul.

A Unique Title For Me

Chronicles of a Wayward Woman

...on the perilous journey of self discovery

Down The Rabbit Hole

Understanding and applying the true intent of the bible.

Down the Rabbit Hole

inside the mind of an outcast

This is my journey of leaving a narcissistic husband.

Autism late diagnosis , learning about autism and getting older at the same time.

A Sovereign Voice in a Chorus of Nations

Information the Government, Fake News and Social Media Don't Want You to See